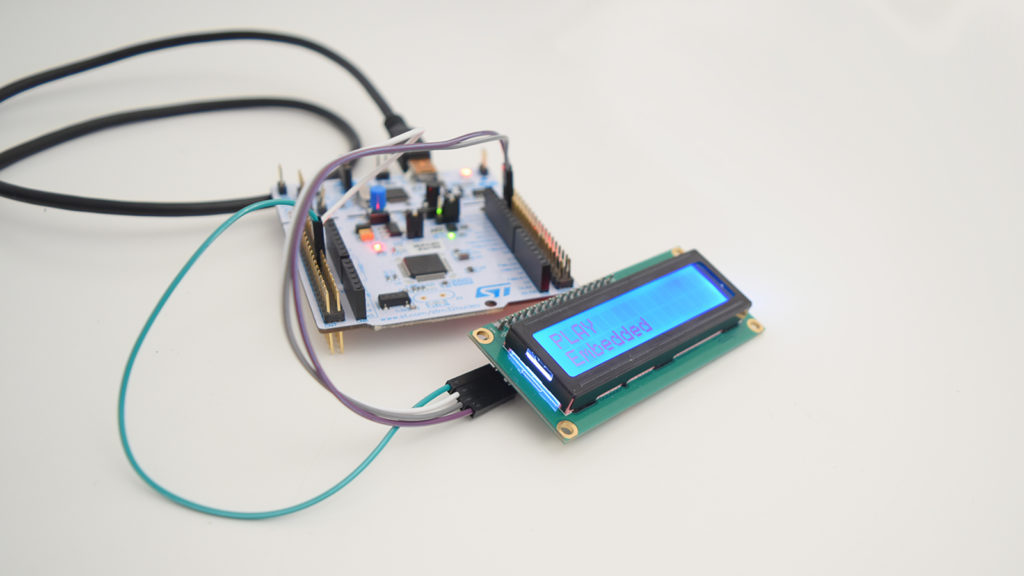 The Inter-Integrated Circuit (often shored as I2C or I2C bus pronounced I-squared-C or alternatively I-two-C) is a widely used synchronous serial communication peripheral which communicates in half duplex mode using a multi-master-multi-slave architecture.

Like the SPI, the I2C is a Synchronous Serial bus, and the clock signal is generated by one of the endpoint and provided to the others through a specific Serial Clock Line often shorted as SCL by a party which is named Master.

In half-duplex buses, the communication happens on the same line no matter the direction. The I2C uses indeed a single data line known as Serial Data often shorted as SDA.

The slave selection happens sending additional data along with information and implementing a protocol: no additional wires are required and I2C is often called two-wire serial in contrast to the four-wire one (the SPI).

The whole I2C communication happens on the two wire which can be driven by all the bus contenders. To avoid short circuits the I2C uses open drain lines with pull up resistor with typical voltages of 3.3 or 5 V: when bus is in idle condition both SDA and SCL assume an high logic value.

Each I2C transaction begins with a Start condition (SCL high and SDA moves from high to low) and ends with a Stop condition (SCL high and SDA moves from low to high). A transaction is composed by one or more messages where each message is 1 byte word (8-bit) plus an addition bit which has the purpose to guarantee synchronization between master and slave: Acknowledge/Not acknowledge (ACK/NACK) bit.

The communication cannot stop in the middle of the transaction: To prematurely abort the operation the receiver as to issue a NACK and after that the master has to issue the Stop Condition otherwise the bus will be in an undefined condition.

The first two word are used to establish the slave to which the communication is addressed, the type of communication and indirectly the number of messages of the transaction. Such addition data is usually know as protocol overhead. The first byte includes the Slave Address (shorted as SAD and having usually 7-bit lenght MSB bun in certain cases also 10-bit) and a read/write bit (R/W 1-bit LSB where read is 1 and write is 0). If slave is a device having registers, the second word is often used to issue which slave sub register the master wants to read/write (often shorted as SUB). At this point in case of read the slave will reply a certain number of messages and the master has to provide clock for each messages, in case of write the master will send a certain number of messages. Communication always ends with a stop condition.

While some of these stuff are well specified by I2C standard others depends on slave thus you should always refer to their user manual. Note that if a device is I2C compliant will most likely be aligned to the I2C specification.

The communication baud rate is adjustable according to some well specified values:

Anyway note that these values refers only to clock speed and thus does not take in account protocol overhead as well as clock stretching and other condition which makes the actual baud rate lower than the selected value.

Across the various STM32 subfamilies there are three different hardware version of the I2C cell. We have already explained how to identify the driver version of your STM32 board here reporting them in a table. Anyway, as quick reference:

Note that STM32 offers many I2C instances (from 2 in the small packages up to 4 in larger packages). I2C cells are identified with a progressive number (i.e. I2C 1, I2C 2, I2C 3 and so on). Note also that I2C bus relies on GPIO alternate functions to be able to get in touch with the outside world.

The current ChibiOS I2C driver allows only master mode offering a simple interface to use I2C in synchronous way only.

Each API of the I2C Driver starts with the prefix “i2c”. Function names are camel-case, pre-processor constants uppercase and variables lowercase.

Comparing the I2C driver with previously presented SPI Driver or Serial Driver, we can notice that there are some certitudes in ChibiOS: one of these is for sure the consistency of design patterns. The I2C driver is organized like every other simple driver of ChibiOS\HAL:

The following figure represent the state machine of the driver.

The I2Cv1 is extremely simple and has basically three fields:

where op_mode represent the I2C mode which almost always we will configure as OPMODE_I2C and which available values are:

As side note the SMBUS is a lightweight communication bus derivative of I2C usually found in computer motherboards. It is used for communication with the power source transmitting ON/OFF instructions. In 99% cases we have to use complex devices which relies on I2C mode.

The last parameter specify the clock duty cycle and can be

In Standard mode we should select STD_DUTY_CYCLE while in Fast mode FAST_DUTY_CYCLE_2.

The first parameter is timingr which represent the value of the I2C Timing Register. It allows to apply some fine tuning to the clock speed, hold and setup time. Bit fields are described in manual and it offers also a series of formula to compute the high and low period as well as rising and falling time.

These register offer a lot of flexibility but are very difficult to be configured especially the first one. My suggestion is to refer to testhal demo for STM32 equipped with I2Cv2 (e.g STM32F3) to copy a working configuration an adopt it in your project: this would work almost always.

As said the I2C communication from the master point of view can be synthesized in these steps:

This activity can be simply addressed with a single API

If we want to write only we can set rxbuf to NULL and rxbytes to 0. Similarly some slave devices have has not registers and can be read only. In this case after issuing the slave address and the read bit (first word) it will start to reply with words until the master does not issue the stop condition: in such case we could set txbuf to NULL and txbytes to 0, or alternatively use the function

Timeout can be disabled choosing TIME_INFINITE or using the macros

which actually are re-definitions of the previous presented functions with TIME_INFINITE timeout.

To conclude, note that these functions return a message which relies on ACK/NACK. This is interesting because in case of communication error software can take an action based on the error flag.

where available error flags are

The driver offers also a couple of API to acquire and release the bus: i2cAcquireBus and i2cReleaseBus.

Such functions are useful when the same I2C driver is used from two threads because they guarantee that none will use that I2C driver until it is acquired avoiding misbehaviour due to concurrent access. Note that these API requires I2C_USE_MUTUAL_EXCLUSION is set to TRUE in the halconf.h file.

We have already planned a collection of example and exercises for the I2C driver. If you are interested in follow us on Facebook to be updated on our articles. Anyway, at this moment you could refer to the I2C demo under testhal to give it a try.

Another interesting use of I2C is the HD44780 LDC with backpack:

You can also try the demo under testex for STM32 Nucleo with external x-Nucleo IKS01A1 or IKS01A2 which are expansion board equipped with MEMS which communicates over I2C.

Even STM32F3 Discovery which uses I2C to communicate with LSM303DLHC: this is a 3-axis accelerometer + 3-axis magnetometer connected to the MCU through the I2C. Basically the chip acts like two separate slaves having different registers and different Slave Address.

This article is part of a series of articles which are meant to be tutorials. I have composed them to be read in sequence. Here the previous and next article of this series:

From category "Getting started"

This section contains a series of articles which are meant to be tutorials. The best way to getting started is to read them in this order:
9 articles from this category
On PLAY Embedded we are using cookies. Anyway you privacy is safe! Read our policy!